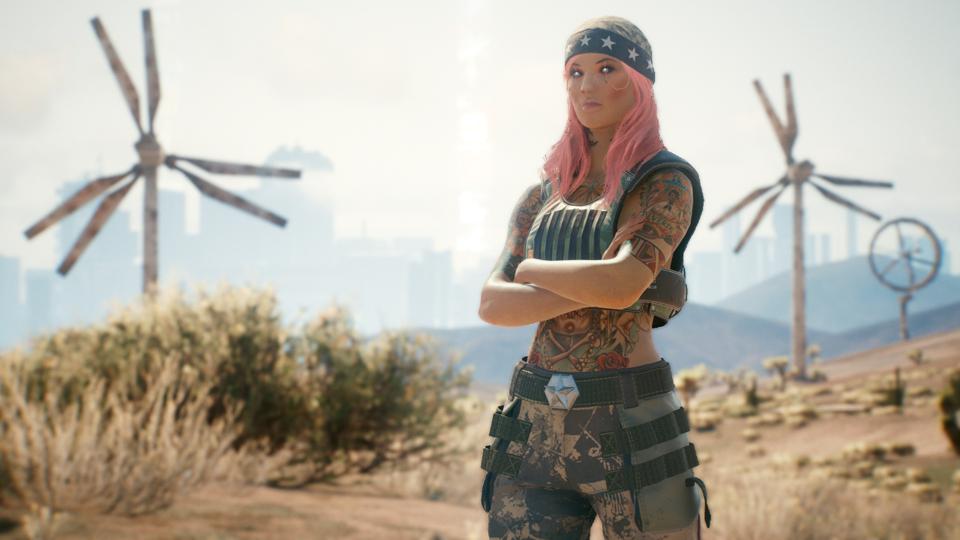 This is definitely (after they patched it a bunch) one of my top 10 favorite games of all time. I cannot stop playing. It appeals to my OCD style of gameplay where I do every mission or side mission in the game. Even the collecting isn’t that bad because it gives you directions on where to go once you right-click on the item on the map.

TIP: Don’t use the emergency brake, use the S key to brake. They seem to want you to combo braking and letting off the accelerator to control the out-of-control cars.

Adult Warning
There are a good 5 times where your character is naked and another scene where you’re watching a long sex scene with Keanu and a bottomless chick. Haha. That’s why I make my characters hot chicks, just in case. Haha.

This was the most amazing game world I’ve ever seen. Imagine going back to the 1980s and telling people about this world you’d get to play in the year 2020. I should replay Saint’s Row 2-3 to compare. They have city sections and a lot of vertical content accessed via roads, ramps, or elevators. It’s incredible. You can be in the same building but be in all sorts of different areas with missions yet still be in the same building.

The graphics are incredible as well as all holograms, advertisements, map decorations, etc.

They have a whole team just making advertisements in the game. Some are gross but some are hilarious. The NPCs also just talk about random things. They really captured the cyberpunk world of the future. They also did a good job with the level of trash that would exist in a city like this. Giant dumps outside the city. Hah. It’s really hard navigating over the junk though.

Story Missions
Most original and fun missions I’ve seen besides some in Saint’s Row or classic GTAs. The single-player is full of choices letting you replay making different characters and choices.

Con: not incredibly clear when you’re making a big story choice in the dialog.

Bug: people call you at the same time it’s trying to give you a mission talk

What really sells it is the voice actress for my selected character (more available) + the performances by Keanu. I was doing a mission that went 1+ hour before being completed. I’ve never experienced that before. It’s almost never that I’m able to suspend belief in a game mission where I don’t recognize that I’m in a game and actually care what is going on but they managed to achieve it.

They manage to convince you to care about story characters that die which I’ve also never experienced except in Red Dead Redemption 2.

Pro: characters whine and complain when you make story choices they don’t like. Haha

Side Missions
Most insane amount of side missions I’ve ever seen. I’ve spent 20 hours just on 2 little sections of the city doing all of them. Overall, I did every side thing.

Keanu Reeves
Absolute best implementation of integrating a celebrity into a game I’ve ever seen other than just playing as the celebrity. I’ll try to not spoil it. He did a great acting performance too.

Phone / Texting
Way better implementation than the GTA. Just hold down T to call then hit tab to switch to text messaging.

Con: The people INSTANTLY respond to text messages, in a way where they couldn’t possibly type a response that fast. While that’s great for convenience it ruins the experience a little because of its unbelievability.

Con: as the messages fill up, it becomes a chore to find the right message because there are so many on the menu tree.

Cars & Driving
It’s certainly better than any non-GTA game, but very horrible when compared to GTA (San Andreas & GTA V). I was thinking maybe they didn’t spend a lot of time on it because they wanted the focus to be on the world, on foot combat, or missions.

Cop Cars are super lame!
It’s not fun to steal them at all. The siren is ANNOYING sounding. Not satisfying at all. Additionally, the NPC cars do NOTHING if you come up behind them with the siren. What’s cool about stealing cop cars in GTA is the people get out of the way and crash. Otherwise, they look really cool with the LEDs around that change color once the siren is on.

Cop Star System
Very confusing. You get 1-star cops and go and hide in a corner as expected for GTA or Red Dead but it doesn’t wear off at all. They seem to want you to leave the area but that’s not clear on the map or in-game. Not as good as Rockstar’s star system.

Interface
Not intuitive in a few places. If they ask you to look for a shard, it’s very difficult to find and especially find out where to crack them or which “messages” contain shards that you need to hack. One menu you can only seem to get to by first hitting a menu option like I, then hitting escape.

Had no idea how to do the body implants but figured it out.

Con: game becomes WAY too easy. I was just working people from level 30-50. I never needed the FOOD/DRINK buff system and only used it about 3 times. The challenge became disappointing. I worked the main boss with just a sword and zero points in Blades. It scaled pretty well but then fell apart at the end.

Blades
I made a legendary katana and then I rush and slaughter everyone. The challenge level seems to be very low doing that option but I was L30+. It’s hilarious but very low-skill. I just jam lots of healing potions.

Huge Con: you spend all the time destroying items for mats, but you can’t protect the items (legendary crafted especially, epic) so that you don’t destroy them by mistake as you do this for upwards of hours. I destroyed at least 10 items I wanted to keep by mistake. You should be able to flag them as “don’t destroy” etc.

Language
Great use of some more futuristic language but not enough that it’s hard to understand. 10/10 on the language selection/usage. Preem. Prolly. NOVA! Gonks.

Character
=They put the dumbest hats on you. I wish you could do the “ethereal” item that doesn’t display on character, etc. “does not display on the character”. “there’s no way to hide an item you’re wearing.” You spend all this time making your character look custom and cool and then the item system destroys it as you try to min/max the best equipment. They need “don’t display” options. Supposedly it’s in the works long term.

Bonus Content
Go into: \steam\steamapps\common\Cyberpunk 2077\BonusContent\ and there’s extra stuff including all the songs.

Overall top 5 or top 10 games of all time for me. So enjoyable.